March 2017 - Nellim, Northern Finland
March 2017 saw us return to Finland, hoping this time we’d have more luck and the Aurora Borealis would be less illusive by putting on a spectacular display. Although we’ve seen the northern lights numerous times on previous trips to Iceland and Norway we’d failed on the first trip to Finland in 2016. It’s kind of the luck of the draw as there’s no guarantee that one will see the northern lights even if the weather conditions are perfect, which they were in 2016 with cloudless clear nights and temperatures down to -27C. C'est la vie. The trip was still great fun as we'd stayed with the Wilderness Hotel Muotka which has plenty of activities on offer, so much so I almost struggled to get my usual amount of landscape photography done, which was a little frustrating as the scenery was so spectacular, but then again who can turn down activities like driving a team of huskies.​
For the March 2017 trip we’d changed the location from our previous years visit to Muotka to the sister resort at Nellim as this wilderness camp was based further north so hopefully we’d get more chance of seeing the lights better. The Wilderness Hotel Nellim, an adventure based ecotourism company, is a camp of log cabins nestled into the landscape by lake Inari, you almost have to be there to really appreciate how beautiful the camp is, especially in winter when there is a deep covering of snow everywhere. ​
We’d arrived at lunchtime, so had the whole afternoon to explore the area and find potential places to shoot the northern lights. Lake Inari was only a very short work away which we’d been told was one of the best places to see the northern lights as the landscape was wide open near the lake, it also faced north. I’d also decided after walking round the camp of log cabins I wanted to try capture the lights over them, so staked out a few spots that might have potential of doing so. ​
The temperature during the day had been a balmy +6C, so by dinner time I wasn’t wearing as many layers as I probably should have as the temperature had dropped down to -12C. As we walked out of our cabin on the way to dinner we saw the lights glowing in the sky above the main building where the restaurant was. I insisted to my better half we’d need to eat dinner very quickly as who knows how long the aurora will last. After scoffing down dinner at a speed that’s not good for you we rushed back to the cabin to grab our camera gear. I’d decided to skip putting extra base layers on and left the better half changing, but hey I felt hot rushing after rushing around and thought I’d be fine. I left the cabin having arranged to meet Jan by the main building as I wanted to attempt to capture the lights over the log cabins at spots we'd scouted earlier. After we met up we spent a good hour taking shots round the camp before heading off to lake Inari.

Some of the photos taken around the WIlderness Hotel Nellim 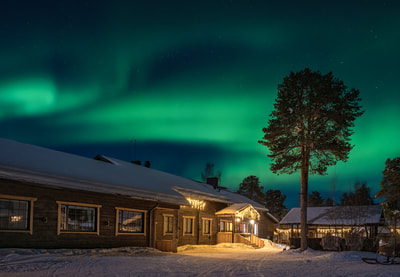 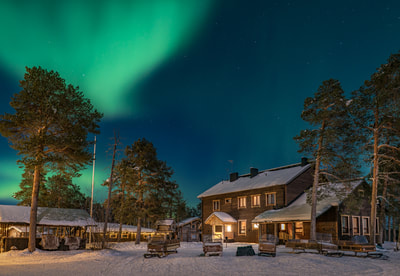 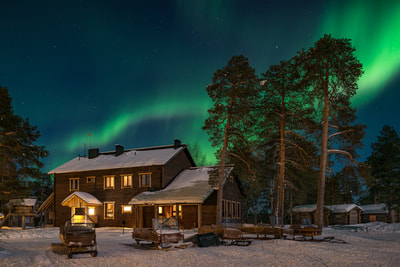 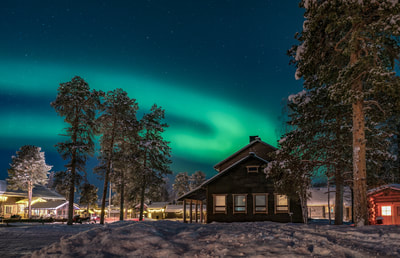 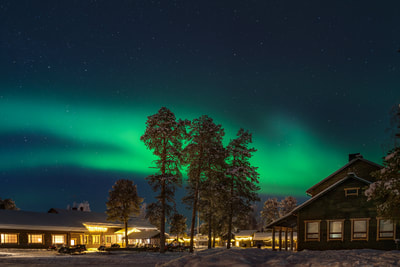 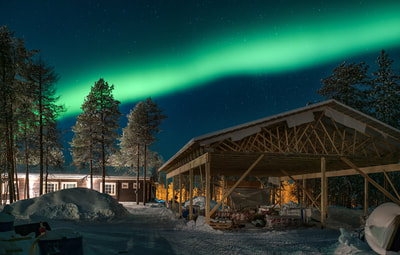 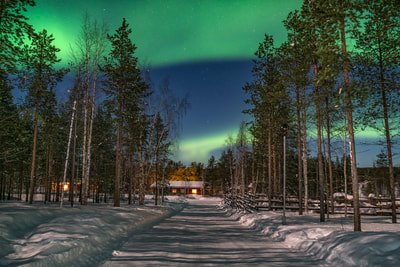 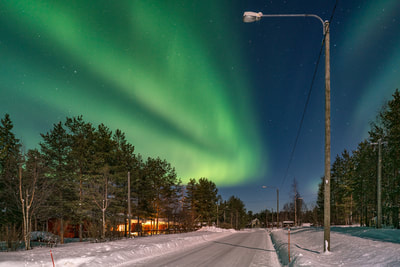 By the time we got to the lake Inari it was 10pm and the temperature was -17C, but wow the lights were good over the frozen lake. Midnight arrive and gone, and by 1am I was starting to feel the cold getting to me, one pair of thermal leggins is definitely not enough in Arctic Lapland, they recommend three pairs. The lights were less strong, so we called it quits and felt very happy with our first night of northern lights, although we both felt a bit cold.​

Some of the photos taken by lake Inari. 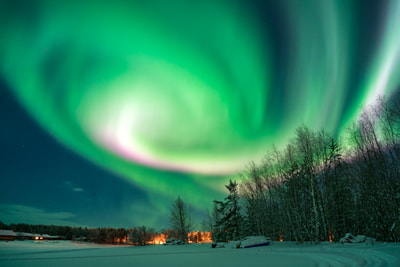 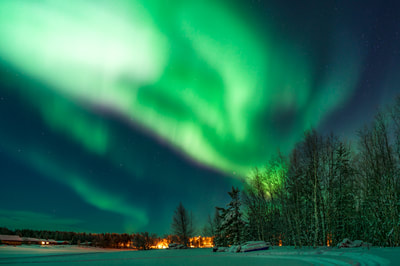 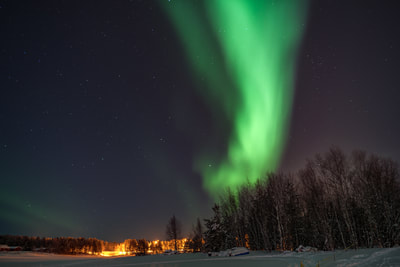 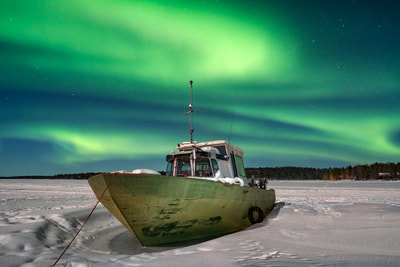 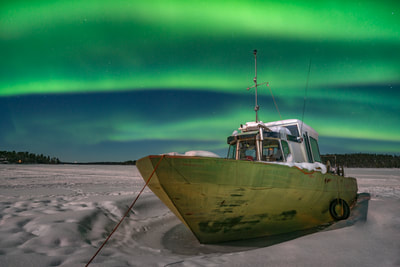 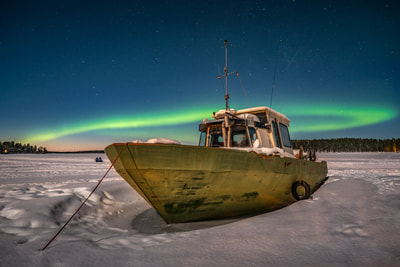 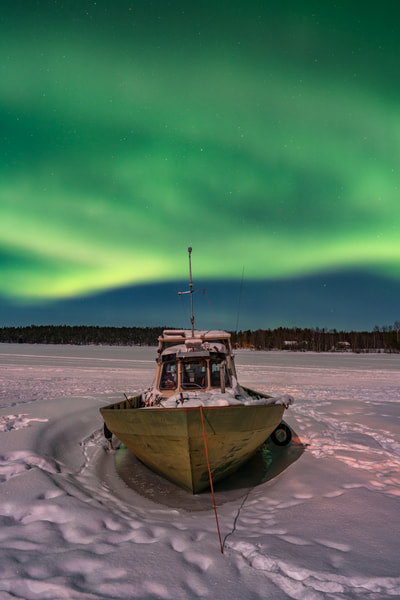 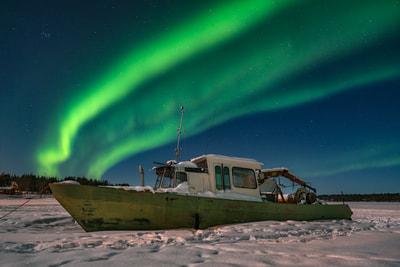 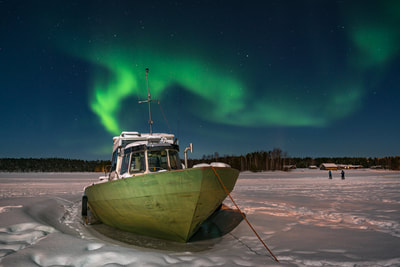 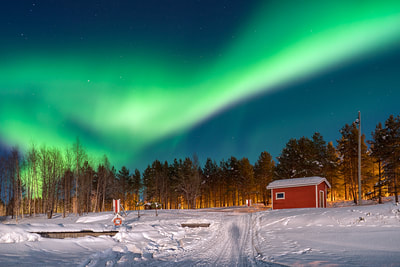 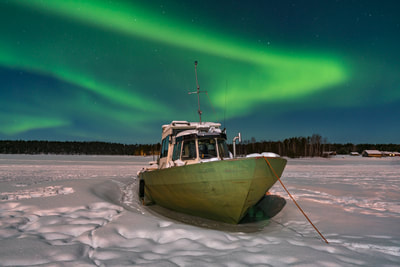 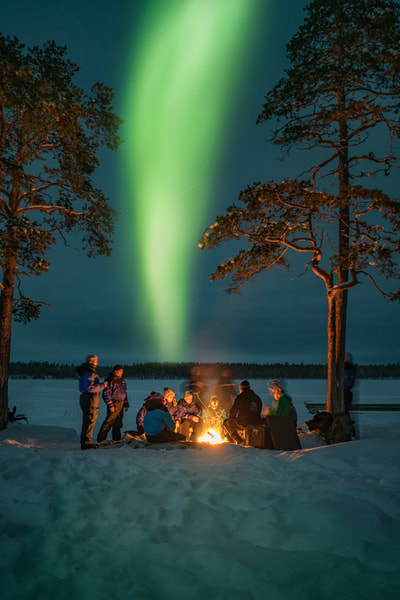 The following morning our activity was snowmobiling out into the wilderness across lake Inari. This was probably my least favourite days activity as it had no objective, and it’s not like you can relax while riding one as you feel like you’re fighting to control it, so riding round on a bumpy snowmobile for hours aimlessly doesn’t do it for me, but each to their own.
​
By the time evening fell it was like someone had pressed the replay button from the previous night and we were off shooting spectacular northern lights again. In all we had five amazing nights in a row of northern lights, something we’d not experienced anywhere until then, usually we’d have been lucky if we had one night seeing the lights on a two week trip.

Apart from shooting the aurora my favorite activity while there was driving the huskies. There’s something really special about driving a team of dogs across a snow covered wilderness, and it’s really hard to put into words the euphoric feeling you get whilst you and the dogs work as a team almost silently gliding over a beautiful snow covered wilderness.

Our trip was a total of six days so unfortunately all to soon it was time to fly back home to the UK, but it is one trip that will always stay with me forever - wow what a great adventure in a great place with such an amazing aurora display every night.

To find out more about Arctic Experiences in Northern Lapland click the link below, we highly recommend them...
Nellim Wilderness Hotels 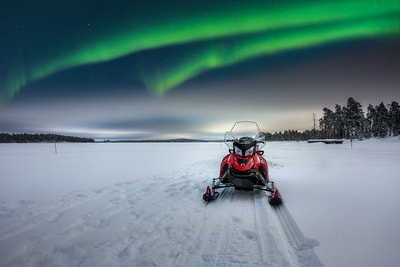 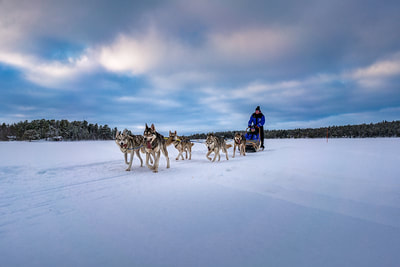 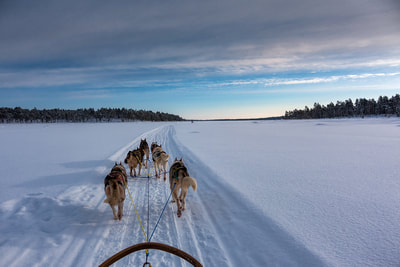 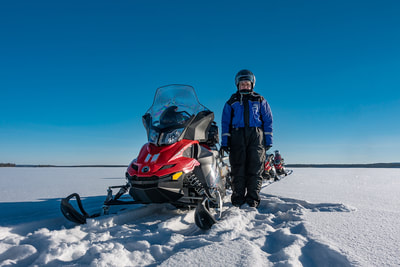